How To Introduce A German Shepherd To A Cat In our home Kovu the cat is top dog. He will determine when rough and tumble play is acceptable and when it’s time to curl up next to each other for a nap. In fact, Kovu the cat and our dogs are more ally than enemy.

Often going on missions together usually with the main end goal being food. Kovu has been known to jump up on the sides and pat food down to our dogs on many occasions.

An unfamiliar cat in the yard? No problems Kovu is up front scaring it off with complete back up and support from his three canine siblings … understandably he’s known locally as ‘thug cat’.

On the other hand, we have a very timid cat named Storm. Although our dogs are great with him now it wasn’t always an easy journey. Whenever storm got scared of something, maybe a leaf falling from a tree? he would run. As a puppy when Storm ran BooBoo our black German Shepherd would chase him.

This is because German Shepherds have a strong natural herding instinct and prey drive. Although when he was a puppy this was likely a game, we needed to ensure this behaviour stopped to ensure safe interaction as he got bigger and stronger.

Before introducing your German Shepherd to your cat there are a few considerations to take into account:

How well socialized is your German Shepherd?

A lot of how well your German Shepherd will get along with a cat will depend upon both its age and how well socialized it is. Characteristics of a German Shepherd

German Shepherd dogs where originally breed to herd and guard sheep. It is their natural instinct to chase, herd and protect. Although it’s unlikely they will mean any harm, for a cat being chased it can be quite scary. These natural instincts do not mean that every German Shepherd will chase every cat at any given opportunity, but it is important to remember that it is in their DNA and the reason the breed became so successful. 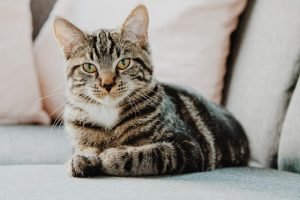 Characteristics of a cat

During new situations and in new environments cats are generally more cautious and reserved than a German Shepherd. They will often prefer to sit back and watch for a while before deciding whether or not to get involved.

This assessment period will vary between different cats. For us Kovu will only access for a few moments before he boldly investigates whereas storm feels much safer watching anything new from a distance for as long as possible. Rarely will he make a move to investigate without the encouragement of a treat.

Age of your German Shepherd

However, if introduced properly there is no reason why an older GSD would not accept a cat being in its life.

How to introduce a German Shepherd to a cat

It is important for the physical and emotional safety of both your German Shepherd and your cat that take the introduction slowly. In calculated and measured way. Even if you think your German Shepherd and cat will get along well. All dogs are different therefore there is no time scale to follow on any of the steps listed below. You must use your best judgement to know when to move onto the next stage.

Give your cat a safe place. This would ideally be a room of their own with a door. In their safe place make sure your cat has its litter, toys, food and water dishes. When you feed your German Shepherd put their bowl down on the other side of the closed safe place door. When your GSD is eating, they will be able to smell your cat. This will enable them to associate the scent of your cat with the positive experience of eating. One of the most important stages of the introduction process is to familiarise scents. German Shepherds are one of the top-ranking dogs on scenting ability. All dogs have between 10,000 – 100,00 times better sense of smell than humans, thanks to their millions of extra scent receptors. Even though your cat is on the other side of the door your German Shepherd will be getting to know them. The two animals will also be able to interact safely with the door acting as a physical barrier. Even after introductions have occurred it’s a good idea to keep the safe place for your cat. Just so they have somewhere to retreat to if it all becomes a bit too much. 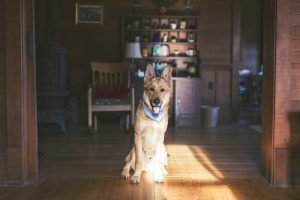 It is important before the physical barrier is lifted (or opened) that your German Shepherd understands some basic commands. Including “stay,” ‘sit” and the most important one “leave’ These commands will enable you to have just enough control to help keep both animals safe.

German Shepherds are very intelligent and by using positive training methods and treat rewards they should start to understand these commands quickly. You can also look into local kindergarten classes to help enhance your Germans Shepherd basic obedience.

When out on a leash if your German Shepherd tries to chase any living thing you must discourage them by telling them ‘No’. To reinforce the ‘No” make sure you stop walking or any fun play you may be doing with them. It is your GSD natural instinct to chase and herd. These instincts can be satisfied by throwing a toy for them to fetch and return. Depending upon the dog this can take a few attempts to master as it goes against everything their natural instincts is telling them to do. Like our Booboo who didn’t quiet master this one for a few months.

The initial meeting should be kept short and last between 5-10 minutes- these meetings can then gradually lengthen as your German Shepherd shows less or no signs of aggression towards your cat.

For your cat’s safety place whichever animal is the newest addition to the family into a large comfy crate. If at any time during the introduction your German Shepherd growls or shows any signs of aggression correct them with a stern “No” If this doesn’t snap them out of it immediately remove whichever animal isn’t in the crate from the room. If you’ve removed your German Shepherd place him in a room on his own for about 5 minutes and if it is safe to do so close the door. Removing your German Shepherd from the situation and placing them on their own for a time out enforces the “No” because, ‘you’ a good thing which has been removed.

Introduction without the crate

To allow the face-to-face interaction for the initial meeting command your GSD to sit and stay. Letting them gradually approach your cat. If they stay calm give them plenty of praise and treats. However, if they aren’t calm and try to lunge at your cat tell your German Shepherd to ‘leave’. If they respond positively, try again. If they do not respond positively take them out the room for a time out before trying again.

Only after consistent positive interactions and when your confident that your German Shepherd will remain calm and not pose a threat to your cat should you move onto this phase.

If you have any doubt about your cat being ready for this stage, do not let your dog off its lead. Keep repeating the stages above until you are confident both animals are ready for this introduction.

Even now your German Shepherd and cat are acquainted its still important for your cat to have its own safe place which your GSD cannot access.

To do this you can either install a cat flap in the door of the cat’s safe room or you can use a child or pet gate to block the room off from your German Shepherd.

It is important to not give up on your animals. The steps you take now towards introducing your German Shepherd and your cat will pay off in the long run and you will likely end up with friends for life. Dogs and cat can and with enough patients will form a tight bond.